THE HORRIBLE KID – Chapter I: A tale from the Lone Arranger 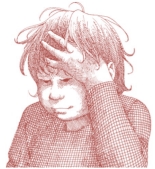 Chapter I:  How “horrible” can a kid be?

In 1999, a well established mental health agency in California opened one of the first private, non-profit “wraparound” programs in the State.  I was selected as the Executive Director.

Wraparound programs were established to provide services to families struggling with troubled or troublesome children while the child was still living in the home.  Without these services, children were in jeopardy of being removed from their families and placed in either a foster home, a group home, or a larger mental health facility.  After all criteria is met, referrals to these programs come from the county Department of Social Services, the Mental Health Department and, though rare, a school district.  As a bonus, it was much more cost effective than out-of-home placement – at least it began that way.

After 12 months of operation, we had a number of successes with the families we were entrusted to help.  Our team was routinely out in the community and in the homes of our families doing “whatever it takes” – the battle cry of all wraparound programs at the time – to keep the family intact.  We had exceptional people working in the program filling the roles of counselor, Mental Health Resource Specialist (MHRS), and therapist.  Though we were still learning, we were dedicated, and we were confident we had the skills to help our families.

One day I got a call from a county social worker.  We were providing services for two of her families already, and she was pleased with our work.  She wanted to refer a nine year old boy she had on her caseload for three months.  Let’s call him Jerry.  Without our help, she feared, Jerry was headed for out-of-home placement.  “If I have to remove Jerry from his home,” she said with some caution, “I’m not so sure I’ll be able to find a foster parent willing to put up with this horrible kid!”

She gave me details, and I accepted the referral.  A few days later, I contacted Jerry’s school and spoke with his school counselor.  I asked how Jerry was doing.  She told me he was enrolled three months earlier, and he was in special classes for the “learning disabled.”  She let me know Jerry was performing below grade level.  When asked, she also said he didn’t have any friends, adding “he’s just horrible in the classroom!”

They did some testing.  Schools love to “test” kids, especially kids they have don’t know how to manage.  The school counselor told me their psychologist determined Jerry “likely has ADHD.”  She was frustrated with Jerry’s mother because, “I told her we wanted to refer Jerry to a child psychiatrist because of the benefits medication can have, and she refused.  Perhaps,” she implored me, “you can help her accept the idea that Jerry has a real disability.”

Since there is no such thing as “disability,” I knew we were going to have to consider the school’s perspective as we developed our plan to help.

That’s what Jerry’s mother said when I asked, for the first time, how Jerry was doing.  We were in her home, her eyes a little misty, she was dejected – not mad.  Her name, for this tale, is Gloria.  Gloria had more or less surrendered herself to the idea Jerry was always going to be her responsibility regardless of the never-ending burden, and that he would never really improve.  She had been told as much by a number of professionals by then.  “The school is right,” she told me, “Jerry is unmanageable.”

Maybe you know kids like this.  Tell him to go left, he goes right – often because you told him to go left.  “Sit down and be quiet!” only seemed to provoke more animated refusals.  “Time-outs” were, well, a waste of time, because he simply wouldn’t comply.  Punishment – the most overused and least effective of all techniques – got nowhere.

Rewards?  Desperation, and continued failure, placed the professionals in his life in the unenviable position of rewarding Jerry for not doing something.  This is common in schools and treatment facilities.  Rewarding a child for not having a tantrum is counter to behavioral techniques and, mostly, another waste of time.  Rewards are provided to start behaviors you want to encourage, not to stop behaviors you want to discourage.  Thus, this approach was also ineffective, leading to an inevitable, irresponsible, and much too common assertion from nearly everyone: “we’ve tried everything, and nothing works.”

Getting him to school was hit and miss.  Gloria did her best in the morning corralling him into the school van that showed up, often with the help of the van driver. Too often, both would yield to the tantrums.  Consequently, Jerry missed a lot of school.  Once he got to there, it was no cakewalk.  Jerry was famous.  Everyone in the small school – including office staff, nurse, maintenance, all the teachers and teacher’s aides, and every administrator in the building knew Jerry.

If sufficiently provoked, it was not uncommon for Jerry to throw objects, tip over chairs and anything else in his way, curse at the top of his lungs, and in other ways defy any and all directives from the adults in his life, sometimes to the point of physical restraint.  He often did so with a sense of glee – and a grin on his face –  that only served to irritate the adults in charge even more.  He had the attention of everyone.  They all greeted him the same way on those days when he did arrive at school.  “Lets have good day today, Jerry . . .” adding, with an apprehensive smile, “. . . okay?”

The Path to Horrible

Jerry never new his father.  Gloria married when she was 28 years old, and she was pregnant a year later.  Her husband left one day when Jerry was nearly two, and never returned.  Gloria and her young son were abandoned, with no means, so she moved in with her mother.  I’ll call her Eleanor.  At the time, Eleanor lived in a nice home in Orange County, California.  Gloria was Eleanor’s second child.  She had an older daughter in Florida.  Jerry was her only grandson.  Eleanor was widowed a year before Jerry was born.

When she first moved into her mother’s home, everything was “okay,” so said Gloria.  Jerry was mostly happy, and always active.  He was alone most of the time, and seemed to enjoy himself.  There were no other family members in California.  Gloria was a full time bookkeeper for a department store, working 40 hours a week to support the family.  Because her mother was home while Gloria worked, and because of financial considerations, Jerry never attended pre-school.  He hadn’t had much interaction with other children his age until he started Kindergarten.

Real trouble didn’t start until Jerry entered school.  By the time he was in the first grade, “he just refused to pay attention to his teacher,” said his mother.  “He hated sitting still in the classroom,” adding, “I was constantly getting phone calls from school that he was becoming harder and harder to manage, and that he was falling behind his classmates.”

By mid-semester, the school suggested a special class for Jerry.  Gloria dutifully agreed.  After the required school meeting that included his mother and the relevant professionals in his life, Jerry was officially declared, “learning disabled.”  Now six years old, his school career was getting off to a very rocky start.  Over the next year, behaviors worsened.

Jerry was becoming harder to manage at home as well.  By the time he was seven, he was a “terror” at home, according his mom.  Both mother and grandmother were frightened by his outbursts and did what they could to appease him.  By then, raising Jerry had become a full time job for Gloria and her mother.  Speaking of jobs, Gloria told me she began to miss more and more work due to a series of crises involving Jerry and his school.  As if not enough stress already for this family, Jerry was known in the neighborhood as the “wild child.”  Neighbors kept their children away from him.

There were dozens of meetings, new plans were developed, and a string of professionals had come and gone, with no results.  At some point, social services became involved.  With encouragement from many, Gloria and Eleanor decided to move.  Maybe, everyone reasoned, a fresh start in a different setting was in order.  Eleanor found a tenant for her home in Orange County, and the family moved to an isolated home, in a small desert city, on the outskirts of Southern California.  Social services transferred the case to the new county.

Three months later, we were asked to help.

ADDENDUM:  For the temperament trained reader

Jerry’s Temperament:  Star (Artisan).  In Please Understand Me, and Please Understand me II, David Keirsey referred to the Artisan Composer (ISFP) as the “most misunderstood of all the types,” and “the least understood of all,” respectively.  Wow.  So very accurate.  After 30 years implementing temperament theory as a means to understand and help children, I can tell you first hand, Keirsey nailed this one.  Like no other children, Stars are medicated, cajoled, bargained with, threatened, and isolated, all as a means to get them the “STOP!” doing whatever it is they are doing, so they can “START!” listening to you.  Stars need to shine, and they need an audience.  Unfortunately, unless guided, any audience will do.

THE HORRIBLE KID – Chapter II: A tale from the Lone Arranger

Comments on: "THE HORRIBLE KID – Chapter I: A tale from the Lone Arranger" (13)